Longtime Dumfries Mutual agent Glen Nixon turned 60 on Saturday, October 7, 2017. Glen has been with our company since 1979, making this his 38th year. On the occasion of his milestone birthday, we took the opportunity to interview him on a variety of interesting topics. This is the second article in a three-part series where you can learn about Glen as a person and agent, the changes he has witnessed during his career, and his thoughts on mutual insurance for today’s generation. Contact us today to learn how we can help protect what matters to you!

What are some of the biggest changes you’ve seen during your career as an agent?

Types of coverage: When I started, we only sold fire and lightning coverages. Windstorm protection was sold by the Woodstock Windstorm Company. That company was wiped out by a tornado that went through Woodstock and surrounding area in 1979. After that tornado, our company started selling windstorm directly to our clients. Then came liability and theft coverages, which were controversial at the time because of the potential for fraud claims. Today we offer a broad variety of home, auto, commercial, and farm coverages.

Replacement cost: When replacement cost insurance was introduced, there were many in the industry who opposed it. Some feared that offering something brand new, instead of merely the depreciated value of the property destroyed, would lead to more claims. But in the end it simply sped up the claims process and made things easier for both clients and the company.

Deductibles: There was major push back from clients when the first deductible of $50 came into force. They thought it was unfair if they had to pay anything out of pocket if a claim occurred. Today, deductibles are used as a way to control the rising cost of insurance.

Farm insurance: When I started, barns were usually insured for more than the house, as this was the source of income for the farm. Part of the thinking was that a barn would be totally destroyed in a fire, whereas you might be able to save part of a house. Today, most homes are insured to 100% of replacement cost, as well as the outbuildings.

Generational change: When I started, many people were grateful for the ability to be able to buy affordable insurance. This was not always the case for their parents and grandparents. Today’s generation has different values and are more focused on the cost of insurance.

The role of women: When I started selling policies, men made all the decisions in regards to insurance. I would sit down with a couple in their kitchen and the wife would usually make tea or coffee while I talked with her husband. In most cases, the wife wasn’t even listed on the policy as an insured. This changed in the 90s, when I started persuading men to put it in both names. Today, women tend to make most of the insurance decisions!

New office building: We’re all very excited about our new office being built just southeast of the City of Cambridge. It’s an excellent location, with great visibility from Highway 8 where hundreds of cars drive by daily. It’s a sign of how the team at Dumfries Mutual will continue to advance forward and benefit our policyholders. 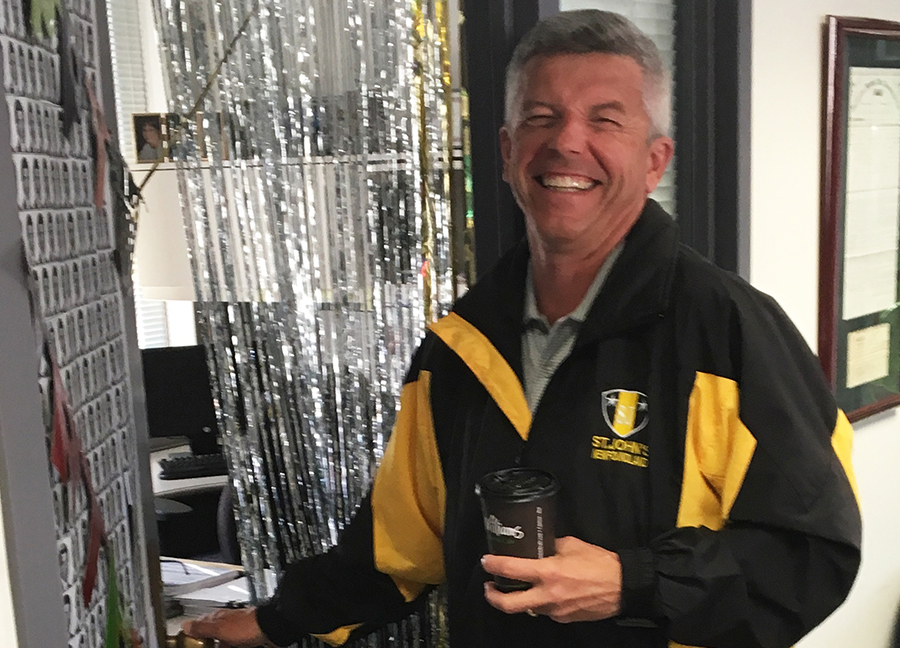 On Tuesday, October 10, the Dumfries team surprised Glen by decorating his office in celebration of his birthday. On his door were hundreds of impressions of his agent photo from earlier days.